This clock is about 12 inches in diameter.  In order to give the 3D appearance I wanted, I recessed the clock blank I had and did a cutout of the Led Zeppelin Angel (Song Remains the Same). 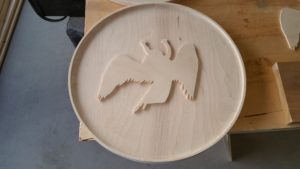 The angel was painted with a glow in the dark paint and the details were hand painted with a tiny liner brush.  The green mist halo is a special color I worked up for my customer based on the request.  I had originally intended to only put the logos from Led Zeppelin IV but it was insisted that I get the words Led Zeppelin on the clock face.  The lettering is no more than a ball point pen width wide.  I had to use a magnifying glass to cut the tape before I could paint.  But the final result=AMAZING! 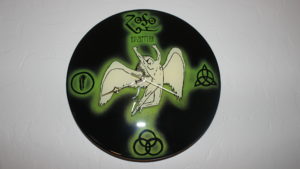 This photo was taken on my wall with as much natural indoor light as I could muster, but I had to use the camera flash anyway.  So, I decided to take it outside where there was plenty of natural light with lots of color contrast in the background. 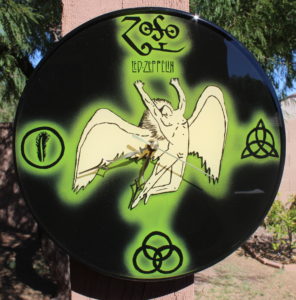 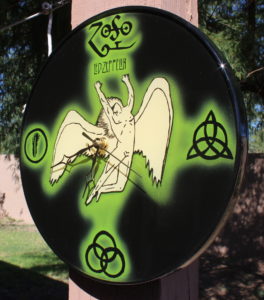 Contact me directly at mdf234@yahoo.com to customize your own clock.  This extreme custom work does take a bit of time.  And the pouring and curing of the glaze requires multiple coats with minimum cure times between coats.